We rarely question why it is… that we’re all arranged in pews and looking [in] one direction, which renders us passive, muted spectators for the majority of the service wherein we’re becoming… experts in inspecting the neck of the person in front of us…  -Frank Viola1 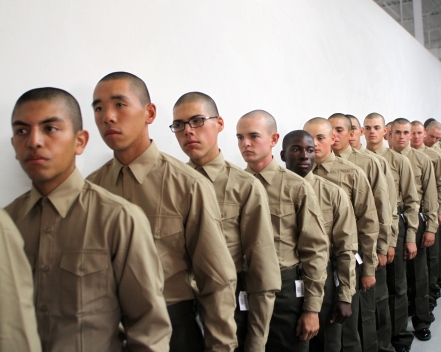 The United States Marine Corps has been perfecting its method of training recruits for over two centuries.  The fundamental problem the Corps must solve is how to take civilians who have spent their entire lives as individuals largely free from the constraints of authority and in 13 weeks, condition them to function as members of an organization who will obey orders without question.

The first martial skill recruits learn is close order drill—marching in formation—the archaic method of maneuvering military units.  Close order drill is a more disciplined form of the unit movement that is conducted throughout the day.  Any physical movement, other than what is directed by the drill instructor, is forbidden.  The platoon members are not allowed to look around, talk, or interact with each other.  The entire platoon is forced to march in lockstep, to march in the same direction, to follow the orders of one person.  While this practice is exceptionally useful for developing discipline in recruits who become extremely adept at tolerating physical discomfort without shuffling their feet, shaking the cramps out of their arms, scratching their faces, or brushing bugs off their skin, the stated goal of the training is to teach immediate obedience to orders.

In a short time, the soft, undisciplined civilian is transformed into a hardened, disciplined soldier who is passively obedient to his chain of command.  An unfortunate side effect of this conditioning is that young Marines tend to grow up through the ranks with the mindset that questioning authority is wrong.  They adapt to a system that frequently rewards yes men and discourages dissent.  “But,” an astute observer might ask, “don’t we want soldiers who are trained to kill maintained under strict control?”  While we certainly don’t want military members to be unrestrained, indiscriminate killers, the answer isn’t as obvious as one might think.

Ironically, the sort of control practiced during close order drill is completely antithetical to the Marine Corps’ warfighting doctrinal concept of decentralized control.  Decentralized control allows for creative problem solving and decision making at the lowest levels.  While decentralized control is a highly effective method of solving complex problems, the reality is that many commanders become uneasy with the idea of granting their subordinates the freedom to make most decisions on their own.  Over time, the detrimental mentality developed by practicing close order drill becomes more apparent.  Close order drill makes for good parades, but it is a terrible method of maneuvering during combat.  It is good only for ceremonial performances and conditioning passive followers.

In my mind, the parallels between military indoctrination and religious indoctrination couldn’t be more stark, Christianity being one of the clearest examples of this parallel.  The Christian Enterprise revolves around a religious ceremony.  The masses are arranged in a formation with their backs to each other.  They are under the authority and direction of one man.  (Permitting the song leader the discretion to sing four verses of a hymn instead of the prescribed three because “he felt the leading of the Spirit” doesn’t strike me as much of a counter-argument.)  The congregants are not permitted to interact (except momentarily during the hand shaking song).  They are not permitted to interrupt the program or speak—except perhaps to say “amen” to show their agreement with the pastor.  They march in disciplined lockstep in the direction that the Man of God dictates.  Questioning is highly discouraged and dissent is dealt with quickly and severely.  This organized framework is required for the theatrical performance that is the hallmark of our Sunday rituals.  Yet it is a terrible method of developing confident decision makers or of dealing with the realities of everyday life.

During close order drill, if the leader makes a mistake, the whole platoon moves in the wrong direction.  There is no mechanism for addressing mistakes.  In combat, if the leader makes a mistake, one would hope that another member of the platoon would point it out before the whole platoon moves in the wrong direction.  In religion, the masses are trained to be passive followers and to allow the higher ups to make the decisions.  If the leader makes a mistake, usually, the whole congregation is dragged along with him.  Elder boards and congregational governance models may slightly mitigate the detrimental effects of hierarchy on institutional decision making, but they do nothing to mitigate the intellectual inbreeding spawned by institutional religion.  The military doctrine of decentralized control encourages every member of the platoon to be a leader at the appropriate time and when he has the ability.  This doctrine (minus its retention of hierarchy) is much closer to Jesus’ intent for how the assembly of his followers was to operate.

Many are quick to point out that without religion and its authoritarian hierarchy, we are left without a mechanism for enforcing compliance with moral standards.  This is true, but it shouldn’t scare us.  I would contend that religion and human hierarchy, despite their usefulness at instilling a sort of moral discipline, are functionally useless at developing true virtue.  God never intended for humans to be held under an artificial, hierarchical authority to enforce behavioral compliance.  He intends for us to flourish in an environment in which each person functions as a part of a body that encourages the development of virtue by choice—not by coercion.

Jesus doesn’t desire the development of religious automatons who perform on command and don’t question orders or doctrine.  He desires an assembly of people who follow his leading and work together in harmony to build his kingdom.