When we create an institution of any sort, be it government, corporate, social, or religious, we erect automatic barriers between people—barriers between the group within and the masses without.  Sometimes this is intentional.  Sometimes it is unintentional, and the group that formed the institution actually thinks that by forming an institution, they will be able to better serve people on the outside.  And perhaps this is the case for a short time.  Let’s say someone forms a charitable organization.  They form the organization, they staff it, they become connected with other organizations, they get really good at raising money, and they start funneling resources to people that need them.  Mission accomplished.  But over time, the institution begins to take on a life of its own, and the help that is offered to people in need becomes a bureaucratic function rather than an act of service from one person to another.

My intent is not to criticize those who belong to institutions and are sincerely trying to help others.  Members of institutions still accomplish some good, although it is typically in spite of the institution rather than because of it.  My intent is to show how institutions tend to become detrimental to human relationships.

First of all, let’s acknowledge that an institution is not a real entity, which my Apple dictionary tells me is “a thing with a distinct and independent existence.”  Institutions are not sentient beings, but we treat them like they are.  Let’s say you want to start a business.  Unless you’re content to operate on a micro scale, you must apply to your state government for a business permit.  When the business permit is granted, your business is now legally considered to be an entity.

“Not a big deal,” you might say.  “It’s just a concept so we can do business in an orderly manner.  Let’s not make something so innocent into a monster.”  But think about what we’re doing.  A business is not a person.  It cannot reason.  It cannot make decisions.  It cannot feel.  It has no character.  But we begin to treat the institution as if it has the capacity for all of those things.  We throw the term entity around in reference to institutions like it’s a normal thing.  But we’re going to see how accepting this premise begins to form barriers that can only grow bigger and meaner.

“I’m boycotting X corporation because they support a certain agenda.”

“Our university is pro-diversity.”

“What is your church’s stance on infant baptism?”

“My labor union demands that I picket…”

The institution becomes a source of legitimacy, of authority, of plausible deniability.  It becomes less important that I hold a certain opinion.  It’s about surrounding myself with peers who hold the same opinion.  If my opinion is challenged, I don’t need to substantiate it.  I simply have to point to the building.  You and I are now firmly established as insiders or outsiders.  Those who align themselves with the institution are insiders, and there is some comfort in that.  The institution provides them with an identity, and it serves as a barrier to the outside world—and the people which inhabit it.

And this is where institutions begin to erect barriers that minimize human interaction and inhibit the formation of relationships.  When two people interact with each other as individuals, they interact as human beings.  Their interaction is likely to be imperfect.  There will be friction and frustration.  But at the end of the day, they must interact with each other as fellow human beings.  When we form institutions, we are creating artificial entities with which the masses are forced to interact.  We are no longer working together to serve people and solve problems when we force outsiders to interface with a faceless system.  I can’t think of a clearer illustration of this than the local social security office which has a row of plexiglass windows with little speech portals (covered with a metal grille, most likely) and a little hole to pass papers back and forth.  The agency which was formed to provide retirement benefits for aging workers, has taken on an artificial life of its own.  Its “spirit” is a cabal of government workers who have been assimilated into the bureaucracy, and the “beneficiaries” have become outsiders who are identified by a serial number.  The transformation to an impersonal institution is complete.

Once an institution gets staffed, a curious thing happens to the majority of the workers.  Rather than remaining autonomous individuals that interact with the community as free agents, the workers see themselves as simply a part of the system, like a cog in a machine.  You have likely seen this in corporate or government offices.  Even those who do not like the environment and chafe at the institutional inertia become hindered by the institution, which severely degrades their ability to exercise their judgment and make wise decisions based on the needs of the people they are serving.

“The Democratic Party is corrupt!  Join the Republican Party!”

“The university is corrupt!  Join our protest movement!”

We have erected artificial walls, one meticulously manufactured brick at a time; and now we find ourselves lost in a labyrinth, escape from which is impossible without divine intervention.

What about all the good people who belong to institutions?  I am not saying that you are wrong if you work in a business, belong to a club, or support a charity.  Institutions are everywhere.  We can’t avoid them.  Hospitals, labor unions, government agencies, schools, universities, the local retail store.  They are a part of the world system with which we must contend.  It is when we allow those institutions to become preeminent that we go astray.  We ought to carefully evaluate our participation in institutions and determine whether or not we are prioritizing the institution above people, and whether or not we are prioritizing the kingdoms of man over the kingdom of God. 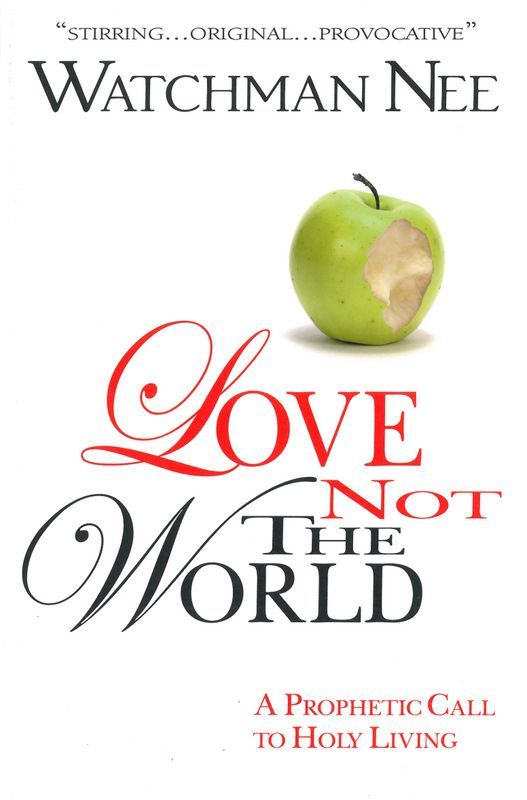 If we are trusting the institution to help people and solve society’s problems, we will always be sorely disappointed, because institutions are a part of the doomed world’s system.  For an profoundly insightful look at the world’s system, read Watchman Nee’s Love Not the World.